Well I went to the Doggie Doctor yesterday! I think I’m gonna live. He did some looking around, and lots of touching. And he thinks that everything is fine with my HIP, KNEE, & Foot. But he does think that I do have this panosteritis (growing pains). Which I had in my front leg later last year. So he said NO xrays were needed. And he doesn’t want me taking any Doggie Pain meds for it. Too many bad side effects from the Rimadyl and Dog Asprin.

He recommended we try a more natural approach. Herbal remedies.

He gave me some funny tasting crystal stuff called ARNICA. Its from a plant. And my mom did some investigating online (again) and she is way into this stuff. I hope it works. I don’t like sore legs. I want to run and play again.

So we shall see how this turns out.

Here is a link to some other dog Herbal Remedies, including Arnica.

I did loose 10 pounds in the last few weeks due to my not feeling well and whining about my leg.. Mum is trying to fatten me back up with fried eggs in my food.. and they are so yummy!!

Here is an interesting page my mum found and wanted me to share: http://www.dogmark.net/dmninter/dogmarkarticle/elliott02.html

And I saw this and thought it was so scary!!! Yikes, I need to eat more eggs!!!

when i was sick!! 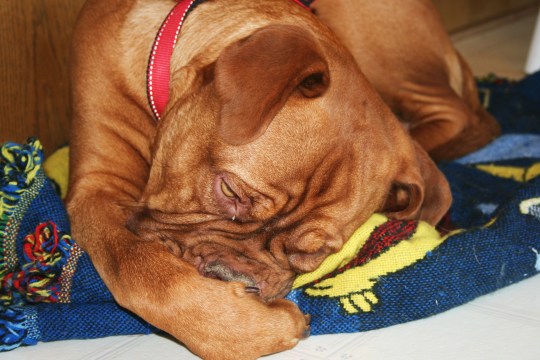 Unfortunately, unlike humans, they are unable to tell us where they hurt!
And When they hurt!

You are in the best person to look for the changes in behavior that may tell you that your dog is in pain.

If your dog shows pain signs you should notify your veterinarian immediately.

• Howling• Whimpering (oh my he did this really bad)

• Yelping (sometimes I thought he was dieing)

• Withdraws from social interaction (not so much this)

• Lapses in housetraining (not at all)

• Sleeps more (Cage sleept less, and when he did it wasn’t solid sound sleep, he was so tired)

• Scratching a particular part of its body

• Restless (he would continue walking the floors for no reason)

• Repetitively gets up and lies down (OH yeah much)

• Trembling, circling or lying very still ( very much so)

• Seeks more affection than usual ( he could no get enough attention, and it seemed the more he got the more he needed)

FACIAL EXPRESSION: (did not notice this much, DDB have many different expressions.. LOL)

• Hair stands up in places

• Doesn’t put weight on a limb (poor leg hurt him so much, he’d not walk on it, but would chase a ball ok… ummmm)

• Limps (head bobbing while he limped along)

• Doesn’t want to be held or picked up

• Acts out of character

• Hunched, with hindquarters raised and front end down on the ground

• Lays on its side (he always does this)

i have a boo boo

Well I’v been ill the past few days! And its no fun. Body aches all over. I’m HOWLing in pain.

Mom is taking me to the vet!

Stay tuned for updates on what he says and how I’m feeling!